A silence that has strength. Protests against the rapes committed by the Russians during the invasion of Ukraine 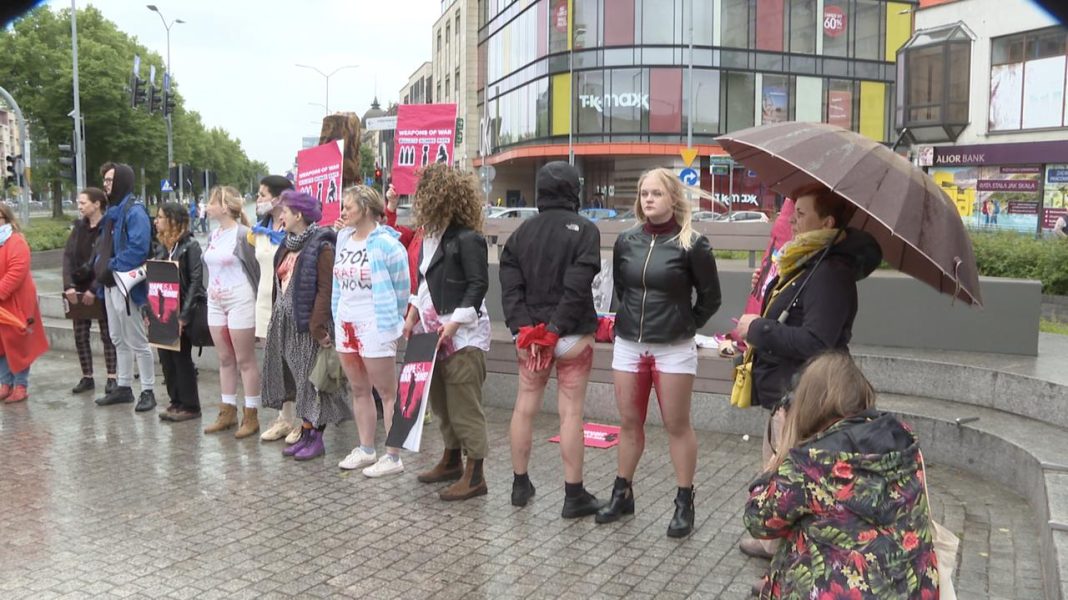 In many cities in Poland and around the world, silent protests were held on Saturday at Russian diplomatic missions. The women had their clothes stained with red paint, symbolizing the blood and suffering of the victims of rape in Ukraine.

Against the war rapes committed by Russian soldiers on Ukrainian women and children, a protest was held on Saturday in front of the Consulate General of the Russian Federation in Poznań. Rape during armed conflicts is not a by-product of the war, it is a powerful weapon against the civilian population, the organizers emphasized.

– In Irpien, in front of a 17-year-old girl, three Russian soldiers beat and raped her mother and younger sister. Both died. Elena recounted how Russian soldiers followed her into the house, pushed her onto the bed without a word, held her with a rifle, undressed, and raped alternately for 12 hours. In one of the basements in Bucza, 25 girls and women aged 14-24 were held and raped many times by a group of Russian soldiers. Among the victims is a 3-year-old boy, a 6-month-old girl raped, a 9-month-old girl who was raped with a candle, a 1-year-old boy who was raped by five men, and two-year-old twins – Elżbieta Grodzka, the organizer of the Poznań protest, quoted nightmarish stories during Saturday’s protest .

They were silent all over the world

As she pointed out, Saturday’s event in front of the Consulate General of the Russian Federation in Poznań is part of a global campaign in which the organizers want to stigmatize, but also show and make society aware of, the brutality and bestiality of the Russian troops. – Today, at one hour all over the world, women go out to show their solidarity with Ukrainian rape victims – emphasized Grodzka. Similar protests were also held in other Polish cities – Warsaw, Krakow and Szczecin, as well as in Berlin, Washington, New York, Philadelphia, Houston, Denver, Lafayette, Houghton, San Francisco, Seattle, Ottawa, Paris, London, Brisbane in Australia. and many other.

Grodzka said that Saturday’s protest should not only express solidarity with Ukrainian women, but also draw attention to the problem of providing them with decent medical care. Grodzka expressed the opinion that although Ukrainian women in Poland are helped by many women’s associations and initiatives, such as Feminoteka, Women’s Rights Center, and the Congress of Women, “unfortunately, Ukrainian women experience the trauma of war rape again, due to procedures that make it difficult to terminate their pregnancy and lack of adequate care in Poland. “.

Grodzka stated that “the worst are the real stories of women who reach us. And this cannot be described.” here, to Poland These are such emotions that it is impossible to describe, which simply should not exist – she emphasized.