Croatia. An accident of a Polish coach. Poles died. What is known – a summary 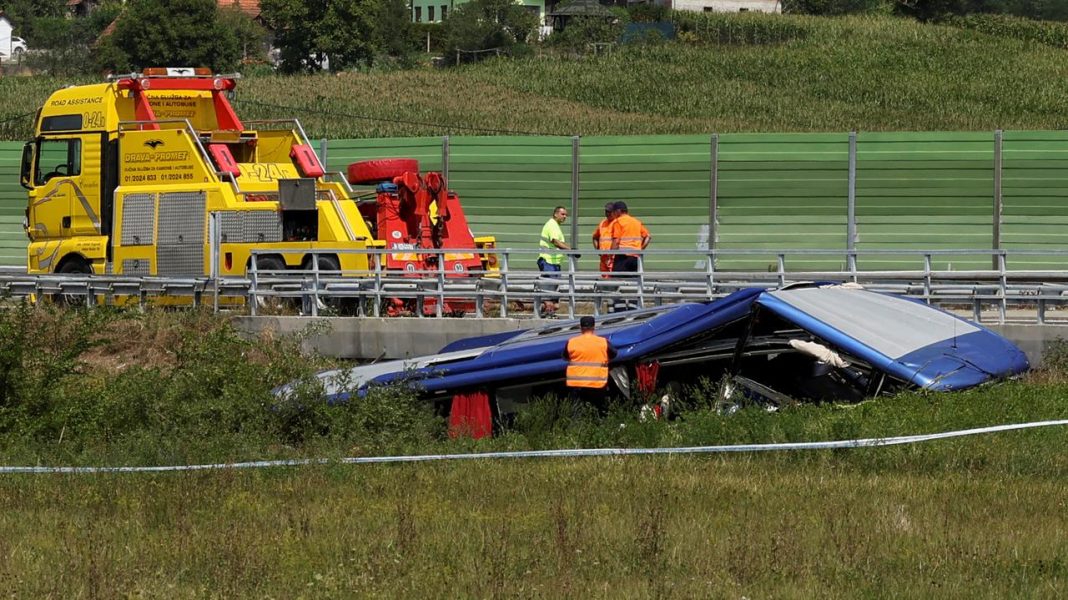 The accident of the Polish coach took place on Saturday morning on a motorway in Croatia. As a result, 12 people were killed and 32 injured – 19 of them seriously. Pilgrims on their way to Medjugorje in Bosnia and Herzegovina traveled by bus. Here’s what we know about the tragic accident.

Where did the accident happen?

Around 5.40 a.m. on the A4 motorway, north of Zagrebin the Varajdin region, between the villages of Jarek Bisaszki and Podvorec. This is where the Polish coach went out of the way.

As a result of an accident on the spot 11 people died and 12 died in the hospital. There are 32 injured people in hospitals. 19 of them are in a serious condition – reported the Croatian Ministry of Health. He confirmed this information in Zagreb in the late afternoon Minister of Health Adam Niedzielski.

In which hospitals are the injured?

The victims were taken to several Croatian hospitals, including Zagreb. Professor Robert Gałązkowski, head of the Polish Medical Air Rescue, before departing to the Croatian capital, together with a team that is to help the victims and their families on the spot, said that some of the people in a serious condition were waiting for an operation or were already undergoing it.

To hospitals in Zagreb 20 people hit. Six seriously injured people were transported to the Rebro clinical hospital in the Croatian capital, one of whom died.

In the traumatological hospital of the Daughters of Charity Eight more injured people are treated, four of them are seriously injured and two of them were operated on after transport.

In a clinical hospital Dubrava is home to six seriously injured victims of the accident, two of them were operated on Saturday.

In the hospital of St. Varażdin 11 injured people were admitted, including five seriously.

In the hospital of St. Czakovec there are two lightly wounded.

Who was traveling by coach?

According to information provided by the Polish Ministry of Foreign Affairs, There were two drivers and 42 pilgrims on board the coachmainly from Sokołów, Konin and Jedlnia near Radom.

They were all Polish citizens. There were no children on the coach.

The spokesman for the Ministry of Foreign Affairs, Łukasz Jasina, said that there were three priests and six nuns among the pilgrims. The rest are lay pilgrims mainly from the voivodeship Masovian. Włocławek diocese from the Kuyavian-Pomeranian Voivodeship informed that among the victims of the accident are people – from 10 to 12 – from the area of ​​this diocese. “Not all survived the accident” – the curia said.

The parish of Saint Wojciech of Konin with Greater Poland also reported that her parishioners were involved in the accident. The number of people who participated in the pilgrimage was not given.

Where did the Poles travel?

They were going to Medjugorje in Bosnia and Herzegovina.

Who was the organizer of the trip?

Jarosław Miłkowski from the office of “At Brother Józef’s”, which – he says – brokered the trip, told PAP that it was organized by one of the nuns who also went there.

Miłkowski assured that he is in constant contact with the services of, among others the Embassy of the Republic of Poland in Croatia, with the Police. “I provide the necessary information all the time. I also sent the necessary documents that were needed for this trip” – he said.

Jarosław Miłkowski explained that the coach on which the pilgrims traveled was hired from an external, proven company from Płońsk.

What was the technical condition of the coach?

The drivers of the coach, who had an accident on the way to Medjugorje, were “rested, with experience”, and the bus was technically functional, Jacek Antoszkiewicz from Megapol, the bus company, told PAP.

The Ministry of Infrastructure confirmed in the early afternoon that the coach had all legally required maintenance.

Where to find information?

The Embassy of the Republic of Poland in Zagreb has launched hotlinefrom which family members of victims can obtain information: + 38 514 899 414.

Croatian authorities – both the Ministry of Foreign Affairs, the Ministry of the Interior and the Ministry of Health – ensure that the injured in the accident are under the best care of specialists in hospitals. On the spot, in two hospitals – in Zagreb and Czakovec – there are Polish policemen working in Croatia – said the spokesman of the police Mariusz Ciarka. He explained that they try to calm down and talk to the victims.

– It is a traumatic experience for them, because they remember that when the accident happened, they survived, but the passenger who was next to them died. The policemen, trying to keep their spirits up, he emphasized.

Ciarka said that on-site officers also explain formal procedures related to explaining the causes and circumstances of the accident. Some of the less wounded ask about the possibility of returning to the country – he added.

On Saturday after The 16th landed also in Zagreb a delegation with the Minister of Health Adam Niedzielski, Deputy Minister of Foreign Affairs Marcin Przydacz and a team consisting of, among others psychologists.

Przydacz said in the evening that Croatian authorities have offered to organize the stay in the country of the families of the victims of the accident. Niedzielski thanked the Croatian services for their help, emphasizing that the injured are under great care.

The investigation into the accident was undertaken by the Warsaw district prosecutor’s office. To initiate an investigation under article 173 par. 3 of the Penal Code – about causing the catastrophe – said the head of the Ministry of Justice and the prosecutor general, Zbigniew Ziobro.

The Croatian side is also investigating.