Croatia – Polish coach accident. Adam Niedzielski in Zagreb about the wounded: they are well looked after 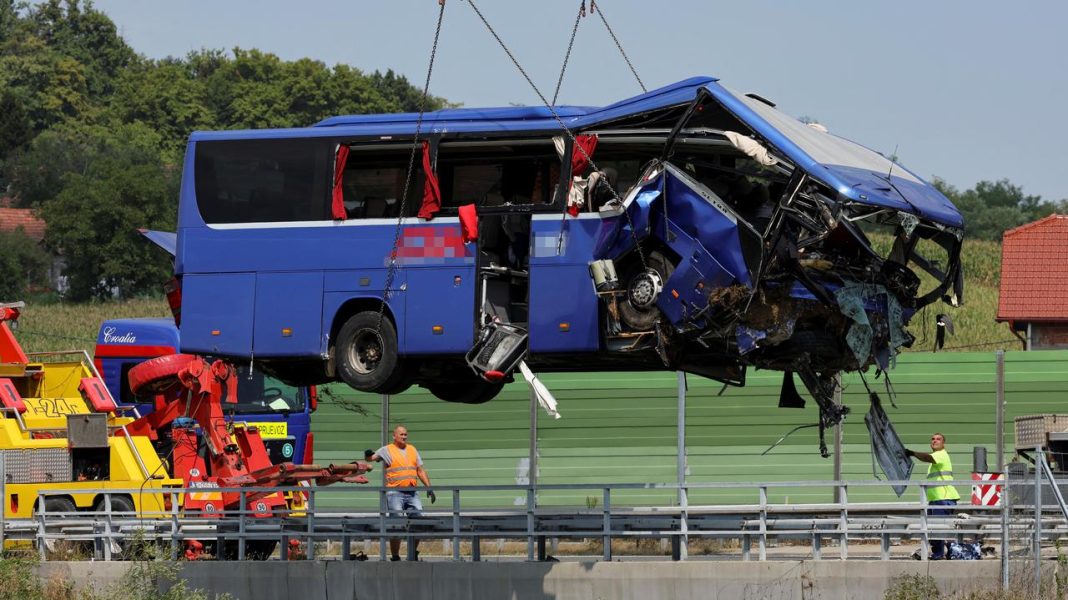 Of the 32 people injured in the Polish coach accident in Croatia, 19 are in a serious condition. The rest are in average condition – said the Minister of Health Adam Niedzielski in Zagreb. He also emphasized that everyone “is taken care of perfectly”. The head of the Ministry of Health also informed that if any patient could be transported, “he will probably return to the country this evening”. The Croatian health minister, Vili Berosz, said that his country’s health care system would do anything to help the injured. Deputy Minister of Foreign Affairs Marcin Przydacz informed that there is a possibility for the families of the victims to come to Croatia.

The latest information on the accident in the tvn24.pl report >>>

A Polish coach accident happened in Croatia on Saturday morning. 12 people are dead and 32 are injured, including 19 seriously. In the afternoon, they came to Zagreb in the afternoon, among others with a team of psychologists Health Minister Adam Niedzielski and Deputy Minister of Foreign Affairs Marcin Przydacz.

After visiting one of the hospitals in Zagreb, where wounded Poles are treated, Niedzielski expressed his sympathy, addressing the families of the people who died. He informed – thus confirming the earlier information – that there were a total of 44 people on the coach together with the drivers. – 11 people died on the spot, one of them died shortly after being transported to the hospital – he informed.

He also said that “32 people injured in this accident have been deployed to five hospitals”, which are “two hospitals in the north of Croatia and three hospitals in Zagreb”. – Unfortunately, out of these 32 people, 19 are in a serious condition. The remaining people are in a mediocre condition – he added.

READ ALSO: Polish policemen help in hospitals. They are with the wounded >>>

The Embassy of the Republic of Poland in Zagreb has launched a hotline where members of the victims’ families can obtain information: + 38 514 899 414.

Niedzielski: if someone can be transported, he will probably come back to Poland today

The head of the Ministry of Health announced that the medical mission with which he came to Croatia was divided into two teams.

– One team went to patients located in two hospitals in the north and there they will complete their medical documentation and verify whether it is possible to transport them to Poland. Because if any patient after the assessment is possible to be transported, he will probably come back to the country this evening – emphasized Niedzielski.

The second team, the Minister of Health added, is visiting hospitals in Zagreb and has similar tasks.

Minister of Health: the injured are well cared for here

– I wanted to assure all of you that the patients who suffered injuries are well looked after here – continued Niedzielski.

He also thanked the government – the prime minister, deputy prime minister and the minister of health of Croatia for the assistance provided to the victims of the accident.

The minister added that “patients are well looked after” and that everyone will receive “basic materials and support”, not least because their luggage is still on the bus. – They are well taken care of – he assured, thanking “the entire Croatian nation”.

Croatian Minister of Health: we will do everything we can to help the victims

The Croatian Minister of Health, Vili Berosz, said that the Croatian health care system would do anything to help the injured.

Berosz said that he showed Niedzielski and the Polish delegation how the wounded were cared for and how the health care system in his country works in practice. He thanked them for coming to Zagreb, as well as all security and emergency services that participated in the rescue operation.

He added that in the hospital in Zagreb, they had already obtained information about the condition of the patients staying here, and now – immediately after the press conference – they will go to other medical facilities where Poles are.

The Croatian minister also told reporters that this Saturday was a difficult day, because otherwise five people were injured near Slavonski Bródno and two people died.

Deputy head of the Ministry of Foreign Affairs: the families of the victims may come to Croatia

Deputy Minister of Foreign Affairs Marcin Przydacz also expressed his “deepest sympathy and regret over the death of Polish citizens”.

– At the same time, I would like to emphasize that from the very beginning the Polish consular services present on the spot acted actively together with Croatian partners to provide the necessary support to Poles who were injured in this catastrophe – he added. He also indicated that “the Polish consul went directly to the scene of the accident, he was also in hospitals providing support”.

The deputy minister of diplomacy recalled that “a hotline has been opened for people who are interested in information about this accident”. – I would like to emphasize that, of course, it concerns families and friends in the first place, but most likely the families of the victims – he said. – We must be aware that there are thousands of Polish tourists in Croatia today. If we have the opportunity to check or contact them, the request to leave this hotline primarily to the families of the victims – he appealed.

Przydacz thanked the Croatian partners for “very good cooperation”. – From the very beginning, Prime Minister Andrej Plenkovic, as well as the Ministry of Foreign Affairs and the Ministry of Health were in contact with our government on an ongoing basis, so as to be able to provide specific information with our diplomats as soon as possible, but also provide support – he said.

– I would also like to thank the Ministry of Foreign Affairs of Croatia for the offer to accept the families of the victims who would like to come here. If there are families of victims in hospitals in Croatia who would like to come to Croatia, the request is to contact our embassy, ​​which will then contact Croatian hosts who provide support in terms of accommodation and accommodation here – he informed. – Of course, we would like the relatives of the victims to have contact with them – he added.