“It is scandalous, his passing,” said an awestruck Gary Neville.

It was early in the second half of Manchester City’s 3-0 win over Arsenal at the Etihad Stadium on Wednesday and the Sky Sports pundit had just watched Ederson, City’s goalkeeper-cum-playmaker, send Riyad Mahrez through on goal with a stunning drilled pass from deep in his own half.

Mahrez was unable to take advantage on that occasion, his miscontrol allowing Bernd Leno to collect the loose ball. But less than two minutes later, with another nonchalant swing of his left boot, Ederson repeated the trick and Arsenal were not so lucky. The move ended with a red card for David Luiz, a penalty, and a second goal for City.

Ederson’s extraordinary passing range has become a feature of City’s play over the last three seasons. Never in Premier League history has a goalkeeper contributed so much to his side with the ball as well as without it. But if Ederson makes it look easy, it’s because, to him, one of the most freakishly talented goalkeepers in the game, it really is.

“I don’t practice it that much, maybe two or three times a week,” he tells Sky Sports with a shrug, speaking via video call following a morning recovery session at City’s Etihad Campus headquarters. “It’s a natural skill that I have, to hit long balls, so I don’t need to practice it every day.” 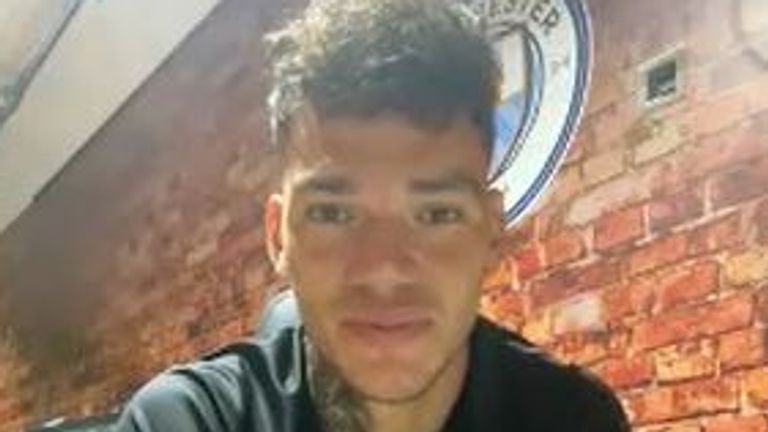 When I play with my friends, I always play as a midfielder. I could do it, but not here at City

Ederson’s ball-playing ability famously prompted Sean Dyche to say it was “like having Ronald Koeman in goal” after a meeting at Turf Moor in 2018. Last year in Brazil, he scored twice while playing as an outfield player in a charity match. At City, he is regarded as the best penalty-taker at the club – “sometimes I practice them on my own after training,” he says – and comfortably holds his own in the warm-up rondos.

So, would he back himself to step into midfield? “When I play with my friends, I always play as a midfielder,” says Ederson. “I could do it, but not here at City. We already have lots of good midfielders in the team. It’s only jokes, but if one day there is an opportunity, who knows?”

He utters the last line with a grin, but City could do a lot worse.

Ederson started out in football as a full-back, after all, and traces his technical prowess back to his footballing beginnings on the futsal courts of his native Sao Paulo. “I think futsal helped me a lot when I was 11 or 12 years old,” he says. “It helped me to think quicker and look for the passing lines. I think I managed to move those lessons to 11-a-side football.”

For Guardiola, it is all part of a vision into which Ederson, a £35m signing from Benfica in 2017, fits perfectly. The 26-year-old is an outstanding goalkeeper, with cat-like reflexes and an impressive command of his area, but he is required to be much more than that under Guardiola.

“The role of a goalkeeper in Pep’s team is like the 11th outfield player on the pitch, in terms of the build-up, the pressing,” says Ederson. “I think it’s more difficult. There is a bigger responsibility because you can’t afford to make any mistakes. If you do, it probably ends in an opposition goal.”

When you see your opponent pressing high, sometimes you don’t have options for a short pass in the build-up, so a long ball can generate a chance to score

Ederson on his long passes

It happened that way in City’s final game before the lockdown, when Ederson’s misplaced throw allowed Scott McTominay to seal a 2-0 win for Manchester United at Old Trafford.

It was not the first time he has erred and it will not be the last.

Besides, Ederson’s is a risk-taker by nature.

When he’s not squeezing passes between opposition forwards in his own box or landing long balls on the width of a postage stamp 70 yards upfield, he is haring off his line to sweep up danger. It resulted in a sickening collision with Liverpool’s Sadio Mane in only his fourth game for City in 2017, and against Arsenal on Wednesday he crashed into City team-mate Eric Garcia in similar circumstances.

Garcia avoided serious injury – “thanks to God,” says Ederson – but despite what he describes as a “big scare”, the goalkeeper will not be reining in his instincts. “It’s good adrenaline,” he says, “and it’s good pressure when you pass the ball between the defenders and yourself and you see the opposition strikers pressing, trying to block the passing lines.”

Ederson relishes playing the Guardiola way and his importance to City can hardly be overstated. In the last three years, he has played a crucial role in two Premier League title wins and seven domestic cup triumphs. This season, he could yet add a Champions League to that list of honours.

It is no coincidence that the side’s true transformation under Guardiola coincided with Ederson’s arrival in 2017, when he replaced Claudio Bravo as No 1, but it is the man in the dugout who has made it all possible and Ederson is indebted to him for taking his game to another level.

“He is a great manager who sees football in another way,” says Ederson. “He lives football and breathes football. The way he thinks about the game is completely different to other managers. He has helped me a lot, but not only me, the rest of my team-mates too.

“You can tell he implanted a style of play in all of us and in the club, so we don’t need much time to practise our football style because we have been playing it for a long time now.

“Of course, it took time for him to make his mark, but when he did it, the team started performing at a great level. You need to train a lot of things to keep that level, but I think the team has already acquired the style of play he wanted to implement.”

It certainly seems to come naturally to Ederson, but things have not always been so straightforward for him.

He grew up in Osasco, a sprawling suburb of Sao Paulo with high rates of poverty and violence, and began his footballing career in the youth ranks of Sao Paulo FC. Ederson made his switch from full-back to goalkeeper there and spent four years travelling two hours each way, on several different buses, in order to get to training – only to be let go at the age of 15.

“I had a tough time when I left Sao Paulo,” he says. “I was disheartened about football and spent about a month and a half without playing. It affected me a lot, I didn’t know whether I wanted to carry on or not, but I had the support of my parents, who encouraged me to go back to school, to go back to training with my friends.

“Thank God, I managed to turn the situation around.”

Ederson was offered the chance to join Benfica and made the move to Portugal when he was still only 16. Two years later, however, he was let go from there as well, required to prove himself elsewhere before Benfica signed him back from Primeira Liga rivals Rio Ave in 2015.

“In life, it’s not all winning,” he says. “There is losing too. There are sad days too. And even on sad days, no matter how difficult the circumstances are, you need to try to keep your focus and determination at a high level to chase your dreams.”

Ederson believes the adversity strengthened his resolve, and his history of moving from place to place in pursuit of his dream equipped him with the adaptability and determination to hit the ground running when, after only a season and a half as Benfica’s first-choice goalkeeper, he arrived in England to take the same position at Manchester City.

“I left my parent’s home early in my life to chase my dreams,” he says. “I think going to Portugal when I was still only 16 helped me a lot in my growth. I learned to look at things in a different way. I had responsibilities very early. It helped me a lot then, and again when I moved here.

“It’s also a championship I had always dreamt of playing in. So, on the one side, I had the passion of always wanting to play in the Premier League, and on the other side, I was the young guy who left his home early. Both factors have been essential in understanding my performances for Manchester City.”

Ederson conceded just 49 goals in 74 appearances in his first two seasons in the Premier League, keeping 36 clean sheets in the process, and while his third has been more difficult, with Liverpool racing clear of City at the top of the table, Guardiola’s men have already won the Community Shield and Carabao Cup and there are still big targets to aim for. 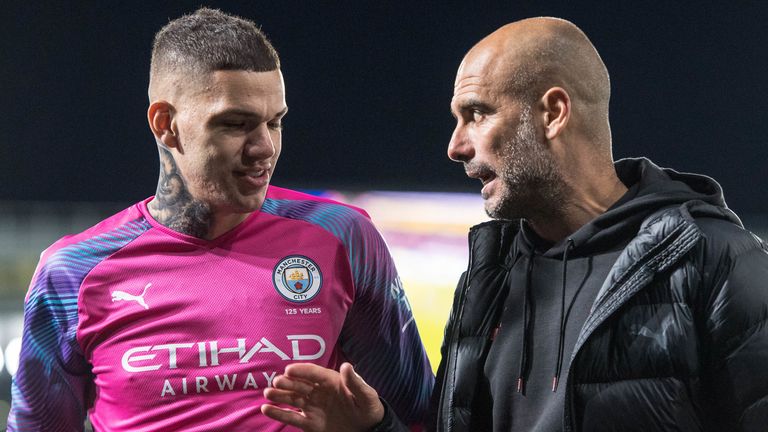 He lives and breathes football. The way he thinks about the game is completely different to other managers

First, there is the FA Cup, with a quarter-final against Newcastle to come later this month.

“It’s a great tournament,” says Ederson. “The final is really cool. We had that experience last season. You see Wembley divided in two, with fans from both sides. It’s a great celebration and, on top of that, it’s another trophy that can end up in our cabinet and is very important to us.”

Then, of course, there is the Champions League. If upheld, City’s European ban will deny them the chance to win it in the next two years. But this season they are well placed to reach the last eight having beaten Real Madrid in the first leg of their last-16 tie at the Bernabeu in February.

“The club has been trying to win it for some time,” adds Ederson. “It’s the only trophy we haven’t won. I hope we get a good result in the game against Real Madrid and we go through. We go game by game and never think too much ahead because you can lose focus. But of course, we have the ambition to win that competition.”

Ederson is approaching the challenges ahead with typical enthusiasm, and it helps that he feels so content with life in Manchester. “My wife loves the city, my daughter goes to school here and my son is going to start soon,” he says, smiling. “We are well settled in the city and at the club.”

He certainly looks at home on the pitch, and it is there, surrounded by the empty stands of football’s post-lockdown landscape, that Ederson will continue to drive this Manchester City side forward. Expect more “scandalous” passes and hair-raising risks when the action continues.

Learn how to look higher in selfies and group images