Janów Lubelski. During the works on the tower of the Church of Saint John the Baptist, the time capsule was discovered 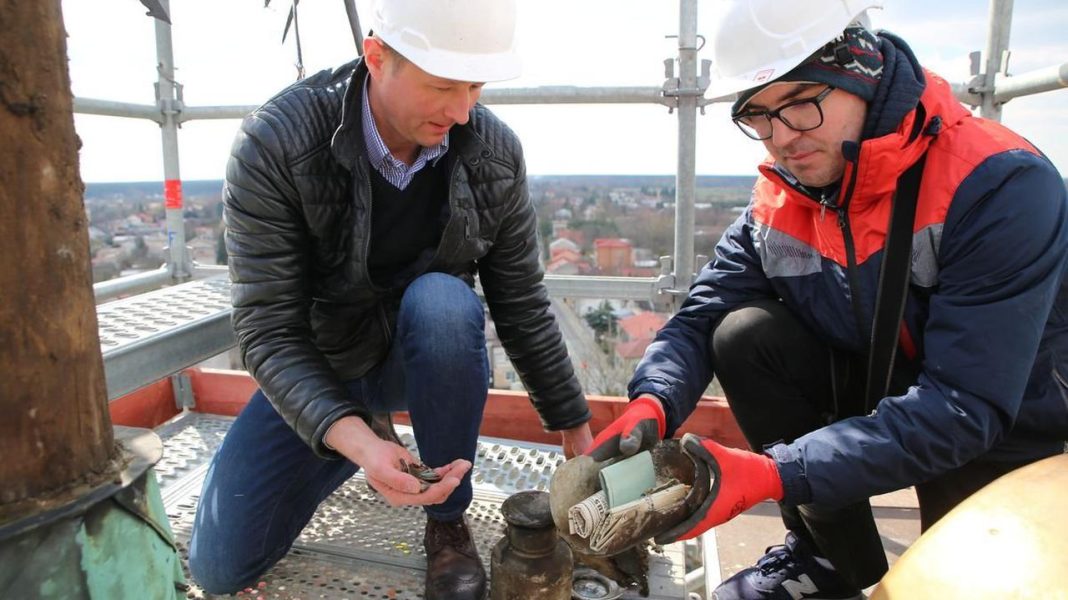 A time capsule was created in this place twice – in 1852 and in 1912. This is the result of the letters that were found in a sphere under the cross crowning the church tower during the renovation of the facade of the church in Janów Lubelski. There were also coins, commemorative medals and newspapers from over a hundred years ago.

According to the pastor of the church of St. John the Baptist in Janów Lubelski, Fr. Tomasz Lis, the time capsule was found during the restoration works during the renovation of the facade of the temple.

– The scaffolding was built and the heavily rusty cross was dismantled – reports the priest.

They heard that there was something inside

When the ball on which the cross was mounted was moved during the disassembly, the people gathered heard that there was something inside.

– So we removed the whole thing with increased caution – adds Father Lis.

The sphere contained two glass vessels and a package wrapped in newspaper. One of the dishes has been broken. Most likely years ago, during the assembly of the ball or from a lightning strike

– Fortunately, the most valuable things were deposited in an undamaged vessel – emphasizes the parish priest.

According to Dr. Dariusz Kopciowski, Lublin Voivodship Conservator of Monuments, the found items were placed in a capsule during two renovations of the church tower carried out in 1852 and 1912.

– Two letters were found in the capsule. One was drawn up by the Dominican fathers in 1852. It contains information on the construction of the tower and the works undertaken in connection with its renovation. The author of the second letter was Father Michał Zawisza, who wrote it in 1912. You can learn from it that the original “time capsule” was found during the renovation. The letter also describes the renovation undertaken in 1912, the conservator explains.

The artifacts will return to the sphere

He adds that in addition to the aforementioned letters, the capsule also contained: catalogs of priests of the Lublin Diocese and Dominican Fathers from 1851 and 1852, liturgical calendars, newspapers from 1911 and 1912 (including Goniec Poranny and Goniec Wieczorny, Ziemia Lubelska, Mucha ), about 140 coins of various denominations and year of issue, six commemorative medals and a photograph of Fr. Michał Zawisza.

– Some newspapers are dated the day preceding the capsule closure – says Dr. Kopciowski.

Fr. The fox announces that all found artifacts will be cataloged. They are to be described and re-placed in the church tower after the renovation works are completed.

Modern souvenirs will be added to the capsule

– What we found will go back to the time capsule. We are preparing our set, which we will put into the capsule – emphasizes the priest.

Also read: A time capsule is to be built in the city, and a digital archive in the bunker. “Lest we end up like Atlantis”

As he explains, a modern letter, coins and other valuable souvenirs will be placed there “so that posterity will also learn interesting things about our times.”

The baroque church of St. John the Baptist in Janów Lubelski, which is also the Sanctuary of Our Lady of the Gracious Rosary, was built in the 18th century. Originally, the temple and the adjoining monastery belonged to the Dominicans. From 1867, diocesan priests take care of the buildings. The sanctuary belongs to the Diocese of Sandomierz.