Łódź. The crime in the Park na Zdrowiu. Image of the perpetrator reconstructed on the basis of DNA 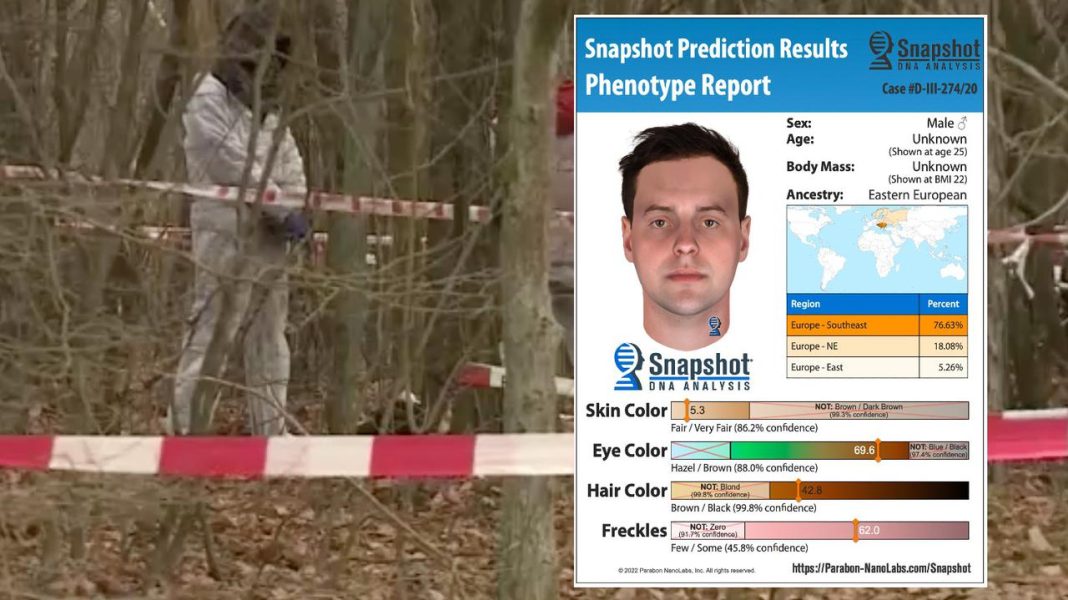 
He has dark hair, brown eyes and – most likely – freckles. This is what – according to American specialists who were asked for help by Polish policemen – the killer of a 57-year-old woman from Łódź should look like this. The woman was murdered on December 4, 2020. The image of the perpetrator was created on the basis of the DNA profile found at the crime scene. The police have appointed a reward and are asking for help from all people who recognize the man in the reconstruction.

The image of the man presented by the police was created by the Parabon Nanolabs Laboratory from USA using advanced genetic research. – This method, used in the United States, was used in Poland for the first time. It allows to predict the features of the external appearance and origin of an unknown person, based on their DNA, says junior inspector Joanna Kącka from the Łódź police. He adds that on the basis of these features, a composite image was created illustrating the expected appearance of the murder perpetrator.

He adds that the published image is a scientific approximation of the DNA-based appearance and does not have to be a faithful representation of the perpetrator’s true appearance.

– Environmental factors such as smoking, drinking alcohol, diet, as well as other factors such as facial hair, hairstyle, scars cannot be predicted on the basis of DNA, therefore they may cause further differences between the predicted and actual appearance – emphasizes Joanna Kącka.

The Parabon Snapshot DNA Phenotyping method has been successfully used in proceedings in the United States with the positive identification of 184 people. Some of them concerned unsolved cases even 25 years ago.

A reward and a request for help

For indicating the perpetrator, there is a prize in the amount of PLN 70 thousand. zlotys, coming from the resources of the police and the family of the murder victim.

Death in the Park na Zdrowiu

The Józef Piłsudski Park, colloquially known as the Na Zdrowiu Park, is the largest park in Łódź, one of the largest in Europe. It covers an area of ​​172 ha.

On December 4, 2020, a 57-year-old woman, living in a nearby single-family home, went out for a walk with her dog around 6 p.m. Less than two hours later, the walkers noticed a purebred dog wandering alone on the park paths. The animal was taken to a veterinary office. It turned out that he had a chip with the address and owners’ details written down. People who found the dog knocked on the door of the 57-year-old’s house. The woman’s husband opened for them, clearly upset that he had not had contact with her for some time.

At 9 p.m. the search began. The policemen found the woman’s body in the bushes the next day. It was covered with leaves.

Investigators analyzed the relationship between the victim and his surroundings, where and with whom he met. It was checked whose phones were logging in near the Health Park at a critical moment. People convicted of sexual offenses in the past were questioned. All for nothing. – In this case, the prosecutor has developed several versions of the investigators, we do not exclude any of them – says prosecutor Bukowiecki, when asked if it was already known whether it was a planned crime or if the 57-year-old was an accidental victim.

Police officers from Germany assisted in the search for the perpetrator for two days. They came to Poland with a trained bloodhound dog. His keepers noted that the animal was able to follow the trail even three months after the incident. However, it did not take the lead.

Traces were secured on the victim’s body and thoroughly examined. Using modern methods of analyzing the genetic code, the experts provided the investigators with general information about the probable age and appearance of the perpetrator.

The prosecution assumed that the perpetrator could later return to the scene of the tragedy. Therefore, for many weeks after the murder, the area was discreetly monitored by the police. How? The prosecutor’s office did not agree to the disclosure of this information.

– We were organizing screening tests near the murder site. We collected DNA from men who live in the area – one of the officers associated with the case enumerates us. – We had a constantly growing group of people from whom we had to reach and collect a DNA sample from them – he adds.

Investigators hope that by examining a large group of people, they will finally find a trail; if they do not even track down the perpetrator directly, they may at least find someone related to him. – The Y chromosome is passed on unchanged from father to son. If we find the right combination of genes, we will talk about a breakthrough – say our interlocutors.

READ ALSO: This crime paralyzed Katowice. On November 2016, a woman was found with a cut throat in a highly frequented park near the city center.

In July last year, policemen investigating the death of a 57-year-old woman published recordings with images of people whose identities could not be established so far, and may be important witnesses in the case. They were in the vicinity of the park in the Lodz health district when the crime took place there.

The films made available are fragments of recordings recorded on December 4 in the evening by cameras installed near the park in Zdrowiu. From the moment of publication, the officers were contacted by a dozen or so people who shared with the police their suspicions as to the identity of the men. However, none of the leads led to a breakthrough, so the police’s call for help remains valid.

– If anyone recognizes these videos, please contact the 24/7 number 47 841 22 56 or 57 as soon as possible. The same should be done by anyone who can help us identify the recorded men. Of course, we ensure full anonymity – emphasizes the junior inspector Joanna Kącka from the Łódź provincial police headquarters.