Meeting of opposition leaders in the Senate. Donald Tusk on the NATO summit in Madrid. Paweł Jabłoński, deputy head of the Ministry of Foreign Affairs, replies 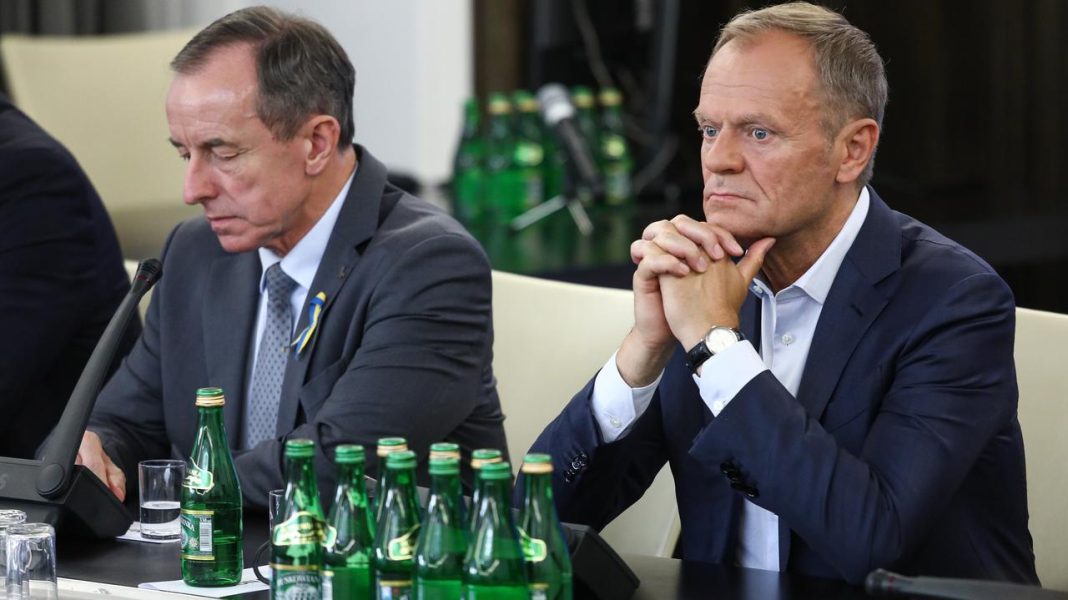 During the meeting of opposition leaders in the Senate, Donald Tusk commented on the results of the ongoing talks at the NATO summit in Madrid. “They’re overwhelmingly positive,” he said. He also appealed for increasing Poland’s expectations, because – as he argued – we are in a worse situation in terms of security than six months ago. Paweł Jabłoński, deputy head of the Ministry of Foreign Affairs, replied, saying that the theses about the lack of real security guarantees were “lies used by Putin”.

Opposition leaders met with politicians from the Senate majority on Wednesday. – We are here today because we are trying to use every appropriate moment with my colleagues representing various opposition parties to approach the great, joint undertaking, which is the victory of the opposition in the elections and the change of the bad state of affairs in which our homeland has found itself. in many dimensions – explained the head of the Civic Platform at the meeting Donald Tusk.

– I must admit that I am very moved by some of the results of the first day of the summit FOR THIS in Madrid. We are all aware that the situation in Ukraine is extremely critical. The threat posed by Russia is growing. We expected that in Madrid, the Polish side would effectively apply for such decisions that would significantly increase Polish security, he continued.

Tusk assessed that the “decisions of the leaders of NATO and president of the United States are definitely positive. “This is, first of all, the agreement with Turkey on the accession of Sweden and Finland to NATO. This changes strategically the situation in the north-eastern part of the flank, there is no doubt that,” he assessed.

The head of the platform also said that the president’s decision could be accepted with satisfaction Joe Biden on the creation of the permanent command of the US V Corps in Poland. – Today, from the official statement of Mr. (Paweł) Soloch from the National Security Bureau, i.e. the president’s representative, I learned that all Polish expectations have been met. I know that these are not easy tasks, but if what we found out about today were all the demands, I really am very concerned about it – he admitted.

Tusk: Polish expectations lower than it results from the threat

Tusk stressed that “we must appreciate the efforts of our allies, especially the United States, we must be pleased with these decisions, especially those changing in some sense the status of NATO troops in Europe”. – These are important decisions, but they do not unequivocally increase Polish security today – he said, arguing that the expectations of the Polish side are incomparably lower compared to the threat in recent months.

He assessed that the government’s actions in this matter were “not very ambitious” and “not very subjective”. – Because objectively, when it comes to our safety, we are in a worse position than six months ago – he explained.

– And the recent signals, showing the very difficult situation of Ukraine, the depletion of defense capabilities for obvious reasons, indicate that this risk will, I am afraid, increase from month to month – he said. At the same time, he appealed that the president should use his visit to Madrid “to very serious pressure and to clearly articulate Poland’s more ambitious proposal”, so that our country becomes “a subject, not an assistant”.

Jabłoński: Tusk basically says the same as the Russian propaganda

Paweł Jabłoński, Deputy Minister of Foreign Affairs, commented on Tusk’s words on Twitter. “On the day when Finland and Sweden were formally invited to NATO, Russia officially recognized as the enemy, and the US transfers to Poland the command of the 5th Corps of its army, Donald Tusk claims that ‘we are less secure’. Russian propaganda repeats the same essentially” – he wrote .

He added that the theses about the ineffectiveness of the alliance and the lack of real security guarantees are “lies used by Putin to intimidate the countries of our region (and, consequently, create pro-Russian political attitudes) and to convince his own society that Russia is strong and NATO is weak”.

Jabłoński stated that “every Western politician repeating these lies is a treasure for Putin’s propaganda, one can expect many citations in the Russian media.”