Mielnik. The ruins of the church on Góra Zamkowa are to undergo conservation. The commune is looking for money 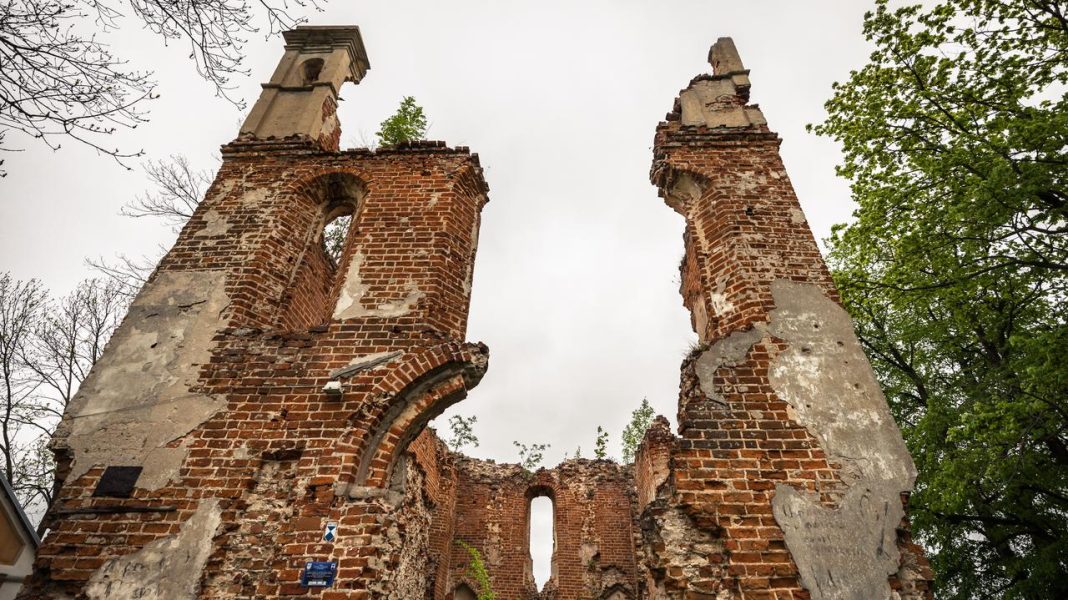 At the foot of the Castle Hill in Mielnik (Podlasie Province), large fragments of the walls of the church have been preserved, which – as the sources say – was founded in 1420 by the Lithuanian Grand Duke Vytautas. Today, this, as the commune authorities call it, a tourist gem is deteriorating. Conservation services issued recommendations, the commune is looking for money to carry out the required works.

– Sources say that the church was founded in 1420 by the Grand Duke of Lithuania Vytautas. However, there is a concept that there was only a confirmation of the foundation then, which would mean that the church already existed before. What is certain, however, is that in the second half of the 16th century it was thoroughly rebuilt (hence the ruins are now referred to as the 16th century – ed.), And in 1618 – re-consecrated – says Karolina Słoniowska-Kuźmicz from the Center for the History of Mielnik.

It is a late Gothic temple, the remains of which can still be admired at the foot of the Castle Mountain in Mielnik.

The temple was burned down in 1915

– The church – just like the castle that once stood on the mountain – was burnt down during the Swedish invasion in 1657. Reconstruction began in 1669. In 1866, as part of the repressions after the January Uprising, the church was closed, and in 1871 it was converted into an Orthodox church. In 1915, the temple was burnt down during the retreat of the Russian troops – says our interlocutor.

After Poland regained independence, the building was returned to Catholics, but it was never rebuilt.

– A committee was established to deal with it, but nothing came of the investment due to the fact that a new church was already erected in Mielnik at that time – emphasizes Karolina Słoniowska-Kuźmicz.

The legend of the Yotvingian king buried in a golden coffin

Next to the ruins of the church, there is also the rectory building – empty today – probably erected in the second half of the 18th century.

– On the other hand, there is a legend related to the Castle Mountain itself, which says that it was built by the Yotvingians who once inhabited this area. All this so that their king, who died in one of the wars with the Lithuanians, could rest at its foot. Apparently he was buried in a golden coffin – smiles Karolina.

The planned works are to protect the monument from further degradation

The Castle Hill and the ruins of the temple are nowadays a tourist attraction of Mielnik. The building is under the care of the commune authorities under the agreement with the local parish and the diocese of Drohiczyn. They plan to carry out works that would protect the monument from further degradation.

Podlasie Voivodship Conservator of Monuments has recently issued recommendations, according to which one should, inter alia, update the documentation including the assessment of the state of preservation of the ruins and carry out conservation works.

– We don’t have the money for this purpose yet. We are looking for external funds – says Marcin Czerwiński, deputy mayor of the Mielnik commune.

He calls the ruins one of the commune’s tourist gems. – We take care of our monuments, allocating money from the budget every year. We have very well-kept churches, for example in Tokary, Koterka or Niemirów. There is only a problem with the ruins on Góra Zamkowa. However, we are of good cheer – he declares.

Also read: A lantern of the dead was erected near Lublin. The first in Europe for centuries

It is not the only tourist attraction in Mielnik itself. Near Góra Zamkowa you can admire the Orthodox Church of the Nativity of the Blessed Virgin Mary, erected in 1821-23, and the cemetery chapel from 1777.

There are also a number of viewpoints in the city, for example on Góra Uszeście, Góra Rowska and on the hill at ul. Dubois, from which there is a view of the opencast chalk mine.

The ruins of the church are located near Zamkowa Street