Old Forest. A herd of bulls escaped from the Opole farm. “They cross roads, fields, forests, they move close to houses” 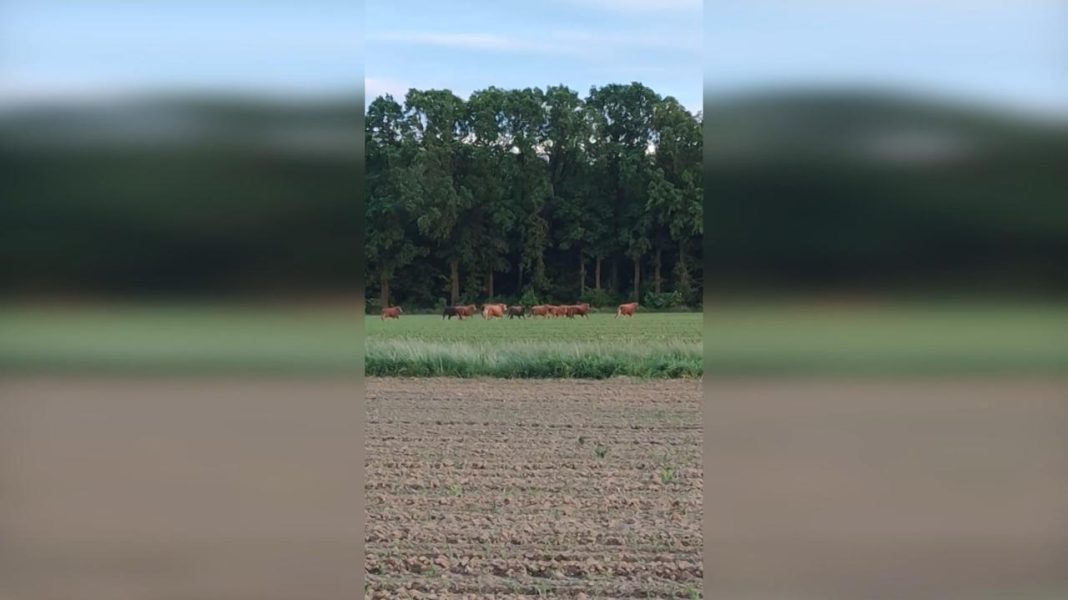 Inhabitants of the area of ​​the Old Forest in the Opolskie Voivodeship are asked to exercise caution. A few days ago, a herd of bulls ran away from one of the farms. Currently, some individuals are found in the Niemysłowice Forest.

A herd of Limousine meat bulls escaped from a farm in Stary Las (Opole Province). After an article in a local portal, officials and the police became interested in the matter. Currently, animals are being harvested.

“We couldn’t chase them even on horseback”

The portal Terazprudnik.pl was first informed about the herd of bulls that had been wandering for at least a few days. Powerful animals belonging to the meat breed wandered around the Prudnik district, and Internet users published photos of bulls walking without any supervision.

“After many attempts to drive, even on horseback, it was not possible to herd them to the right place, because they run away all the time and are timid, react quickly to approaching people. Bulls cross roads, fields, forests and move close to houses, they also run through the streets “- another portal informed in social media – moszczanka24.pl.

According to Marek’s account Vistula from the Poviat Veterinary Inspectorate in Prudnik, the activities last over a week.

– We managed to lead over 20 animals to the herd. There are 13 animals left, these bulls are kept in the nearby Niemysłowicki Forest. Previously, they went to the fields, now they stay closer to the forest – he said in an interview with TVN24.

As he added, the owner of the herd reported that the bulls got out because they broke the fence. One individual can weigh even a ton, so they didn’t have to try hard.

The action of catching animals is “extremely difficult”.

– There are no companies in Poland that catch bulls. Free-range animals are “less domestic” than tethered cattle. When they leave the enclosure, they become semi-wild animals. Approaching them for about 100 meters is possible. Not any closer – said Wisła.

Therefore, it determines the catching method – no weapon can be used, shuttlecocks or hypnotic syringes cannot penetrate the thick skin of bulls.

– Here we put a heifer on the bait – a cow that is in heat. He is of interest to these bulls. They go to a specific place and are herded to the herd. Four people are in the forest with these bulls, watching them. A request to the residents not to enter this forest and drive vehicles there. The bulls can get scared and run away to the fields – he said.

Wisła added that he hopes that the action will last a maximum of a few days. However, if the animals scatter around the area, it can take up to months to catch them.

– The bulls have earrings, so you know what herd they come from. We have two large herds of cattle from genetic resources in Łąka Prudnicka and Wierzbiec in the nearby towns. We secured them so that the bulls would not enter there – he said.

On Friday, the district office in Prudnik published a communiqué of the Poviat Crisis Management Team, which informed about the escape of bulls from a farm in Stary Las (in the neighboring Nysa district). The authors urge the inhabitants to be especially careful in contact with animals which, feeling threatened, may become dangerous to people in foreign terrain.

Officials also ask drivers traveling on roads in the vicinity of Szybowice, Niemysłowice and Mieszkowice to pay attention to animals that may unexpectedly cross the road. Any information about animals can be reported to policemen from Prudnik.