Police. The tombstones were noticed by children playing on the Odra River, they belonged to the former inhabitants. Years later they were pulled out of the water 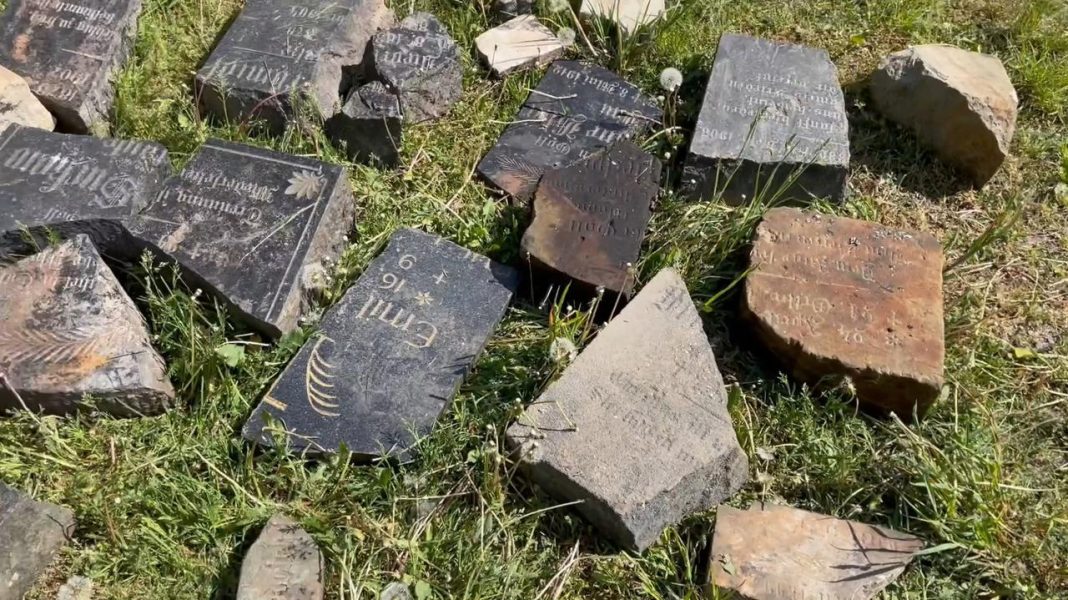 A fragment of a cross from a tombstone of a year and a half boy, some plaques with the names of other people who lived in the present Police County (West Pomeranian Province) before the war. They were thrown into the Oder, probably during the construction of a flood embankment. Years later, the remains of about 120 plates were recovered from the river. They were taken to the lapidarium.

The inhabitants have known about the tombstones sunk in the Oder river in the Jasienica district in Police (West Pomeranian Voivodeship) for 13 years. In 2009, they were found by children playing on the river bank. At that time, several records were moved to the cemetery, where a lapidary was created. Years later, the inhabitants informed the historian and policeman, dr. Marek Łuczak, who is the coordinator of the fight against crimes against the monuments of the Szczecin Provincial Police Headquarters.

As Łuczak says, the residents turned to him via social media. They were convinced that the tombstones could not be pulled out of the river due to the flood embankment.

– I wrote a request to the Maritime Office for their extraction, pointing out that the tombstones were sunk along the shoreline. I received a written consent to take them and transport them to the former cemetery in Jasienica – explains the historian.

A total of 120 tombstones were sunk along the Odra shoreline

There was already consent, but hands were also needed to work. Łuczak decided to look for volunteers by writing a post in social media. Over 20 volunteers applied.

On Sunday (May 22), they went to the Odra River, from where they managed to collect about 120 fragments of tombstones of former residents throughout the day.

One and a half year old boy, women and a few restaurateurs

As Łuczak says, the discovered tombstones come from the entire area of ​​the present Police County, including Wąwelnica, Mierzyn and Kurów. The cemeteries from which they were taken do not exist, therefore the slabs, after being extracted from the water, were taken to the lapidary at Jana Kazimierza Street in Jasienica.

The historian suspects that the plates taken from the cemeteries could have been stored in the repository after the war. According to the accounts of witnesses, they were used, inter alia, to strengthen the flood embankment.

Nearly 30 biographies were established. The plaques include tombstones commemorating several restaurateurs, including Michael Mandelkow from Wąwelnica (German Wamlitz) and Bernhard Macher from Mścięcin (German Messenthin, now it is an estate within Police). A fragment of the cross of a small child – Rudolph Ernst Bagemühl has also been found. The boy was the son of a farmer and died at the age of eighteen.

It was also possible to decode specific people only from fragments of the records.

“We know, for example, that the fragment with the inscription:” … rau u … / … mine Ru … / eb. Gollnow / 28. 11. 18 … “, belongs to Anna Sophie Wilhelmine Rubbert née Gollnow. Wilhelmine was born on November 28, 1860 in Wołczków. She was the daughter of the restaurateur Christian Gollnow and Wilhelmine Gollnow née Broecker from Wołczków. November 17, 1887. in Grzepnica (Armenheide) she married a milk trader from Wołczków, Friedrich Wilhelm Ferdinand Rubbert (born on September 2, 1858 in Neuhaus Kreis Randow, he was the son of builder Carl Ludwig Rubbert and Marie Christine Franziski Rubbert née Hondorf from Neuhaus Kreis Randow). Wilhelmine Rubbert died on March 6, 1918 in Wołczków “- described the historian in social media.

“Tombstones will return to blessed ground”

– We did not take structural fragments of tombstones, only elements with inscriptions commemorating the deceased people. It’s about preserving memory, respect for the dead. We expect the same from Belarusians, Ukrainians and Lithuanians when it comes to Polish graves, so let these gravestones return to the consecrated ground – emphasizes Łuczak.

He adds that – in his opinion – together with the volunteers they found about 80 percent of all fragments with subtitles, but they want to check the banks of the Oder again. However, they have to wait for better weather and a lower water level.