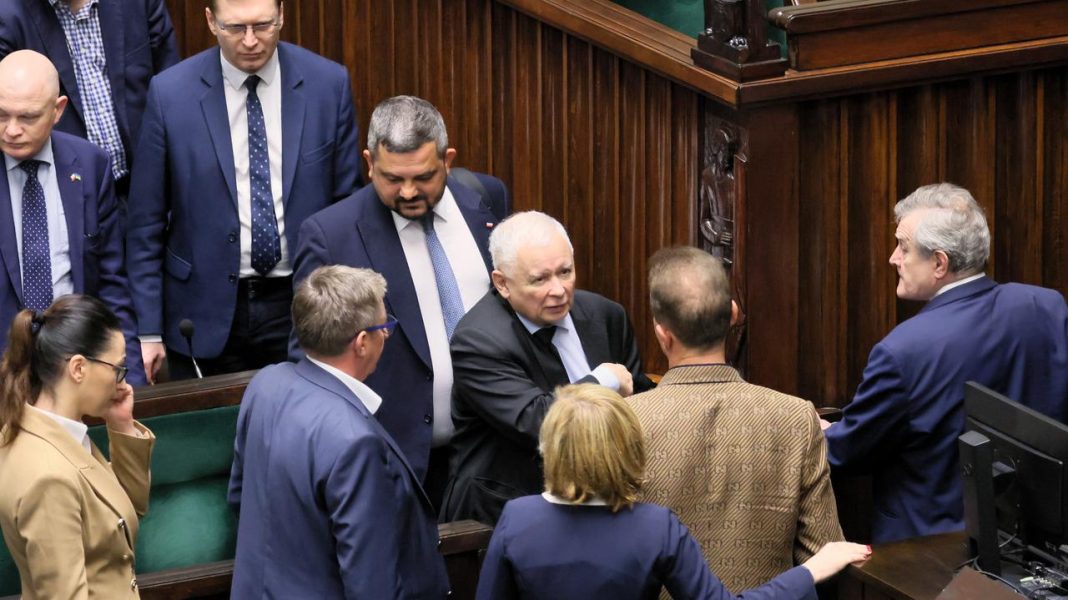 On Thursday, the Sejm adopted an amendment to the law on the Supreme Court, which is to liquidate the Disciplinary Chamber, but introduce the Chamber of Professional Responsibility. Work on the act was commented on by politicians in “Kawa na pewę” on TVN24. In the opinion of the opposition, the law that came out of the Sejm may not be sufficient for the European Commission to accept the Polish National Reconstruction Plan.

Sejm adopted on Thursday initiated by President Andrzej Duda an amendment to the law on the Supreme Court. It assumes the liquidation of the unrecognized Disciplinary Chamber of the Supreme Court, which is one of the conditions of the European Commission for the approval of the Polish Of the National Reconstruction Plan and payments of EU money. In return, the Chamber of Professional Responsibility will be established in the Supreme Court. The amendment also provides for the procedure of “a test of the impartiality and independence of a judge”, but not for legally issued judgments.

Later, the government spokesman, Piotr Mueller, in an interview with journalists in the Sejm, stressed that the law was “passed with amendments that were developed together with Solidarna Polska and, above all, with the president, because, of course, the president is the host of the project.” He judged it to be “an worked out compromise” which – in his opinion – “also fulfills the milestones that have been accepted under the National Reconstruction Plan”.

Zgorzelski: the ruling party resented the president for taking out this project

The work on the changes in the Supreme Court was commented on by the guests of “Coffee on the Bench” on TVN24 on Sunday. – Let’s not be naive. We are still in the legislative process. Anything can happen – said Piotr Zgorzelski, MP and Deputy Speaker of the Sejm on behalf of the PSL-Polish Coalition.

– Remember that the Senate will of course propose amendments that were the opposition’s amendments. You can guess how the Sejm will behave, but the president is always at the end of the legislative process. Here, in my opinion, the ruling party, which resented the president for taking out this project, may prepare various surprises for him – he assessed.

According to Zgorzelski, if the president signs this law, “it does not have to be a bridge to fulfill the dreams of many millions of Poles about funds from the KPO”. He added that the president may not be able to sign this law. “Then he will be smitten with dissatisfaction with the government camp,” he said.

Gasiuk-Pihowicz: The PiS government was not even able to accept three points from the KPO

– We have been seeing for months that the European Commission is doing absolutely everything to normalize these relations with Poland, so that money from the KPO flows to Polish citizens and the Polish economy – said Kamila Gasiuk-Pihowicz, MP from the Civic Coalition.

– Meanwhile, the PiS government has not even been able to accept three important, but simple points from the KPO for a year – she added.

In her opinion, “pampering the anti-EU Ziobro [rząd PiS – red.] he was not able to work out three simple points with the European Union that would guarantee the disbursement of these funds. ”

Semeniuk: milestones in principle have been accepted

The Secretary of State in the Ministry of Development and Technology, Olga Semeniuk, recalled that last year the government sent projects to be part of the KPO, which received a positive opinion. – Today we are discussing only political values ​​- she added.

– We are clear from the beginning: milestones have been accepted in principle. And this is what the visit of the president will serve [Komisji Europejskiej Ursuli von der Leyen – red.]. The implementation of individual topics related to the National Reconstruction Plan, such as digital transformation, construction, infrastructure – also relate to the political aspect – she said. – The National Reconstruction Plan is the subject matter. We can discuss politics and we can talk about its shape, the most important are projects that are to serve Poles – she assessed.

She added that the act on changes in the Supreme Court, which came out of the Sejm, is one of such “milestones”.

Czarzasty: The Commission will not be happy about this

According to the deputy and deputy speaker of the Sejm on behalf of the Left, Włodzimierz Czarzasty, “additional elements will still be assessed”. “I don’t think the Commission will be happy about this,” he said. – I would order to amend this law – he added when asked what he would do as a Commission. He also stated that the funds from the KPO will not be lost. – In my opinion, the Commission will require more during the milestones – said Czarzasty.

Addressing PiS, he said: “You have led to the fact that the amounts of PLN 270 billion, and the question of the remaining 500, were blocked due to the fact that you did not want to abolish the Disciplinary Chamber, which in the end you changed and named it differently; no you wanted to send some of the judges away on leave, and you did not want to hang up the three judges in their work. ”

– This is a scandal and you must always tell you that in the name of political clashes between Ziobro and Kaczyński, or the observation of Mr. and no one will ever forgive you for that, ‘he added.

Hennig-Kloska: The European Commission will not treat this bill as a blank check

The Polish MP in 2050, Paulina Hennig-Kloska, assessed that “the European Commission will not treat this law as a blank check, but will only look at how this law will continue to function in reality and what will happen in the dimension of the judiciary in Poland”.

– Will these judges be reinstated to decide how further pressure will be exerted on the judges? All this will certainly be monitored, because the signing of the KPO itself does not mean that the funds will be released today, because the advance has been lost – she explained.

She also referred to Semeniuk’s statement. – We are not discussing any political values, Minister. We are talking about the rule of law that regulates the area of ​​the investment environment and how European funds are spent. These are extremely important, even key issues – she said.

Presidential advisor Paweł Mucha said that the president “gave an opportunity to reach an agreement”. – We are talking about a certain political aspect – he added, agreeing with Semeniuk.

– The president has broken a certain political stalemate. He gave a good act – he assessed. In his opinion, the bill is still good in the form in which it came from the Sejm. “There is an element of the independence and impartiality test,” he explained. – The key elements related to the creation of the Chamber of Professional Responsibility that will efficiently handle disciplinary cases, plus the political ability to unlock funds from the KPO, that is, retained – he added.

He assessed that the law proposed by the president gave “full chances for an agreement with the European Commission”.