Warsaw. The funeral of Anna Jakubowska “Paulinka”. The veteran rested in Powązki 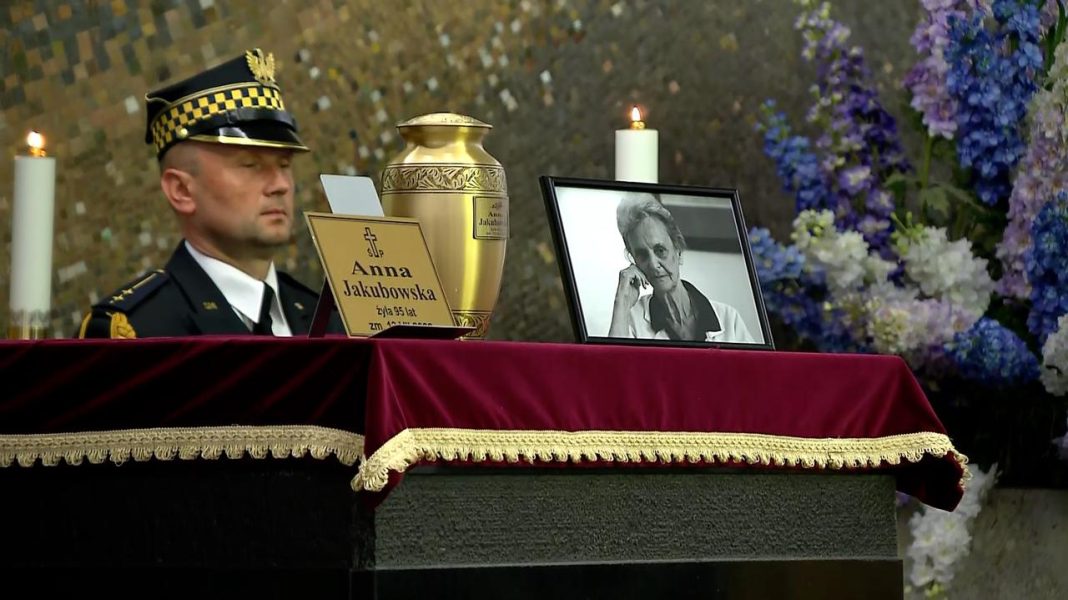 Anna Jakubowska “Paulinka” was laid to rest at the Powązki Military Cemetery. A veteran of the Warsaw Uprising, she died at the age of 95. She was a liaison officer and a nurse for the “Zośka” Battalion.

The funeral of Anna Jakubowska “Paulinka” took place on Saturday afternoon at the Powązki Military Cemetery. The Holy Mass was celebrated at the Funeral Home in Wojskowe Powązki. After its completion, the coffin with the body of the deceased was taken to the family grave.

“Paulinka” died on July 13 at the “Kombatant” Nursing Home in Warsaw. She was 95 years old.

A veteran of the uprising, oppositionist, honorary citizen of Warsaw

Anna Jakubowska née Swierczewska was born on May 26, 1927 in Warsaw. During World War II, she was active in the underground, first in the PET organization, and later as a nurse and liaison officer in assault groups transformed into the Home Army Battalion “Zośka”. Jakubowska fought, inter alia, in Wola, the Old Town and Czerniaków, for which she was awarded the Cross of Valor.

After the war, she began studying psychology at the University of Warsaw, but in 1949 she was arrested for activities in the Home Army and sentenced to the so-called in the toilet trial for eight years in prison, which she left in 1954. In the 1980s, Jakubowska was active in the Solidarity underground. She also initiated the Home Army Film Foundation, which produced over 20 films about the activities of the Home Army.

She was a member of the Chapter of the Order of Polonia Restituta and the jury of the Jan Rodowicz “Anody”. She sat on the Social Council of the Human Rights Defender.

In 2018, she was awarded the title of Honorary Citizen of Warsaw. In the justification of the resolution of the Warsaw Council, it was emphasized that Jakubowska is a Warsaw insurgent, veteran and social activist, inseparably connected with Warsaw throughout her life.

“Paulinka”, convicted after the war for allegedly acting to change the political system in Poland, despite not being politically involved at the time, spent over five years in prison. During this time, she was in abnormal conditions, she was beaten, humiliated and tortured. She also had no contact with her several-year-old son. Her marriage fell apart and her health deteriorated.

On December 13, 2021, the District Court awarded the woman PLN 9 million in compensation. However, according to Gazeta Wyborcza, the judgment was appealed by the Warsaw District Prosecutor’s Office and Piotr Schab, president of the District Court in Warsaw and disciplinary spokesman for judges. According to Schab, the amount of the judgment should have been reduced to three million.

READ MORE: “Paulinka” received compensation for years in prison, according to the prosecutor and judge Schab it is too high

On June 29, 2022, the National Prosecutor’s Office admitted after an analysis that the questioning of the compensation was groundless.

The press spokesman of the National Public Prosecutor’s Office, Łukasz Łapczyński, emphasized that during the Polish People’s Republic, Jakubowska was repressed because of her husband’s independence activity, and for this reason, in accordance with the applicable law, she is entitled to compensation. By the decision of the National Public Prosecutor’s Office, the appeal in this part was withdrawn.

– The prosecutor’s office will not challenge the sentence due to shortcomings in the evidence proceedings conducted by the court relating to the criminal case of Ms. Jakubowska’s husband conducted by the communist authorities – added the spokesman.

Łapczyński also pointed out that, in the opinion of the prosecutor’s office, “the amount of PLN 9 million granted to Ms Anna Jakubowska is too high”. – As it results from the final judgments of Warsaw courts analyzed by the prosecutor’s office, the compensation and damages awarded in 2017-2021 for the sentences of long-term imprisonment or death sentences against soldiers of the independence underground amounted to from 75,000 PLN up to PLN 1 million – he indicated.

The case of compensation was to be examined by the Court of Appeal on Tuesday. However, he decided to transfer her to the Supreme Court so that it would appoint another court to deal with the case.