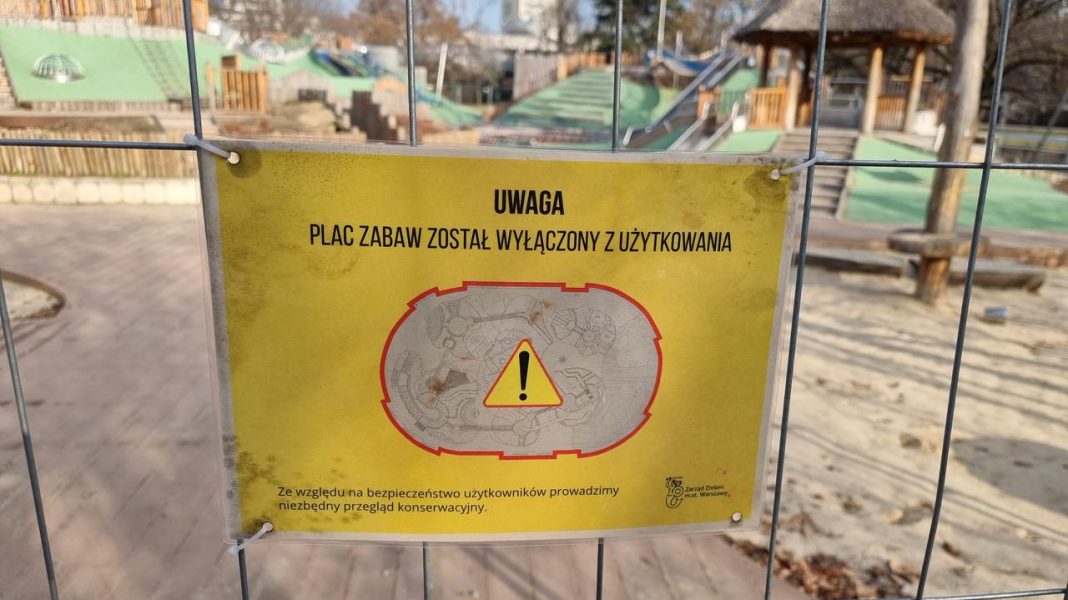 For months, the playground in Ujazdowski Park has been fenced with bars. And that will not change soon. It is already certain that the opening will not take place this season. The contractor did not undertake warranty repairs, therefore the Management Board of Zieleni is looking for a new company to take over its task.

The playground in Ujazdowski Park is exceptionally unlucky, which we informed about on tvnwarszawa.pl several times. The first problems appeared … before it was built. The Green Management Board responsible for the park has parted ways with the first contractor, claiming that the contract had missed the deadline. You had to look for a new company, but it also quickly ran into problems: atmospheric, geological and legal (changing the toy certification rules). Finally, the playground was opened – at the end of July 2019, with a two-year delay. But after a month it was closed to fix the first defects. Then it was also closed due to winter, although there was no frost. And again, during last year’s vacation.

Since then, all playground equipment has remained behind fencing. The officials don’t have good news for the little ones. “Unfortunately, we already know that we will not be able to open the playground to residents this season. We are currently at the stage of selecting a new contractor who will undertake the necessary repair work” – informs the Green Management Board in the latest announcement.

Closed until the end of the year

Last year’s closing of the playground was the result of a periodic annual inspection carried out by the Greenery Board. It turned out then that some of the equipment poses a threat to users. It seemed that the matter could be settled quickly, because under the contract with the contractor, the guarantee is valid until 2024. The latter, however, refused to undertake repairs, claiming that the defects were the result of improper use and negligence in maintaining the equipment.

The management of Zielenia did not agree with this position, therefore an expert opinion was commissioned. This proved that the defects are largely due to the use of materials of poor quality and other than those described in the technical documentation and their insufficient protection against adverse weather conditions. Officials said that defects were also found due to improper construction and installation of devices underground.

In spring, the contractor received another call for defects, but it did not help, therefore the search for a new company that would undertake repairs is ongoing.

– The new contractor will have a maximum of 160 days from the date of signing the contract for the contract – informs Karolina Kwiecień-Łukaszewska, spokeswoman for the ZZW. This date means that the playground will be unavailable until the end of this year. There are a total of 50 items on the list of devices for renovation. It is also necessary to replace the surface on several landings, stairs and bridges, and to maintain over 20 devices and surfaces.

The spokeswoman announces that the contractor of the playground will be charged with the repair costs.

We asked Apis Polska, which was responsible for the construction of the new playground, to respond to the matter by e-mail. We are waiting for answer.

The playground in Ujazdowski Park is still closed